Eating as a Refugee – 7 Days with the Refugee Ration Challenge

This week was World Refugee Week – and we took the plunge with the Refugee Ration Challenge!

I came across the Refugee Ration Challenge, organised by Concern Worldwide, online and my interest was peaked. I’ll readily admit that I had no idea that refugees had to adhere to so limited a diet, which itself is dependent on being able to get to refugee camps in one piece. My ignorance probably speaks of wider social apathy towards the whole refugee crisis and situation in Syria. It’s been on the news for a while, then quietly drops off when people get used to the images of refugee children and want something different to look at. It’s a world away from the world we seem to inhabit – it’s so easy to forget a crisis when it’s one that doesn’t personally involve us.

Then the ration pack arrived. 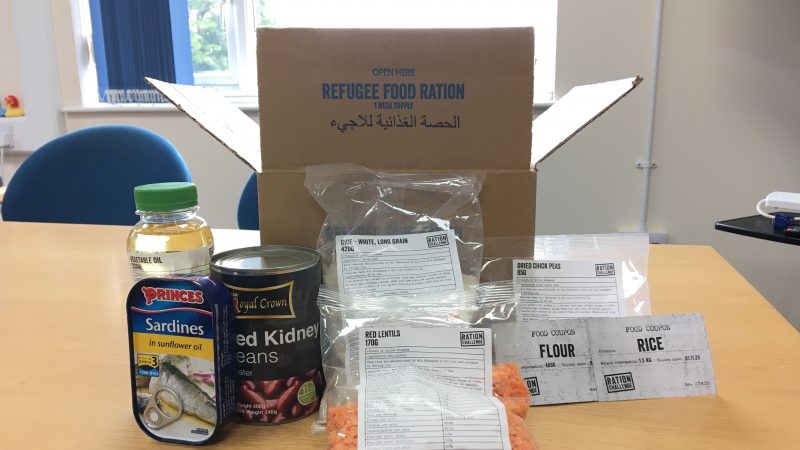 It was quite a reality check.

For one week, I was sent a tin of sardines, a tin of red kidney beans, 170g of red lentils, 420g of long grain white rice, 85g of dried chickpeas, coupons for 400g of flour and 1.5kg of white rice, and a 330ml bottle of vegetable oil. And that was it. It easily looked like something you’d cook for a family for one meal – let alone feed a person for a whole week!

But necessity is the mother of invention – following the recipe book that was included with the rations, I tried out a range of recipes including falafel, flat breads, fried rice and rice flour bread, all helped with my self sponsored spice of smoked paprika. 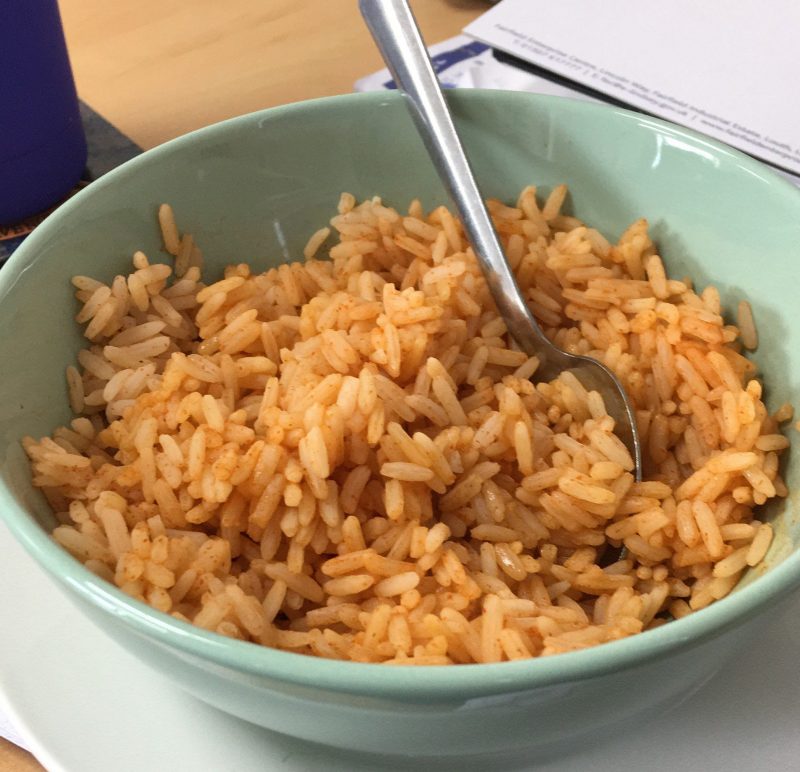 I started on the Friday, thinking that paprika with boiled rice would be absolutely fine. I was very wrong. Turns out rice and smoked paprika tastes like just eating dry, starchy smoked paprika, which isn’t at all pleasant. My allusions that this would be a sparse but relatively easy week were dashed.

So it was a relief over Saturday and Sunday that I was able to prep better thought out recipes. I made flatbreads from flour and water and then fried them in vegetable oil – I never thought I would use all the oil in the week, but it was a sure fire way to get a bit of flavour into the week’s offerings! The flatbreads honestly kept me going through the week, and are a recipe I will definitely revisiting in the future. 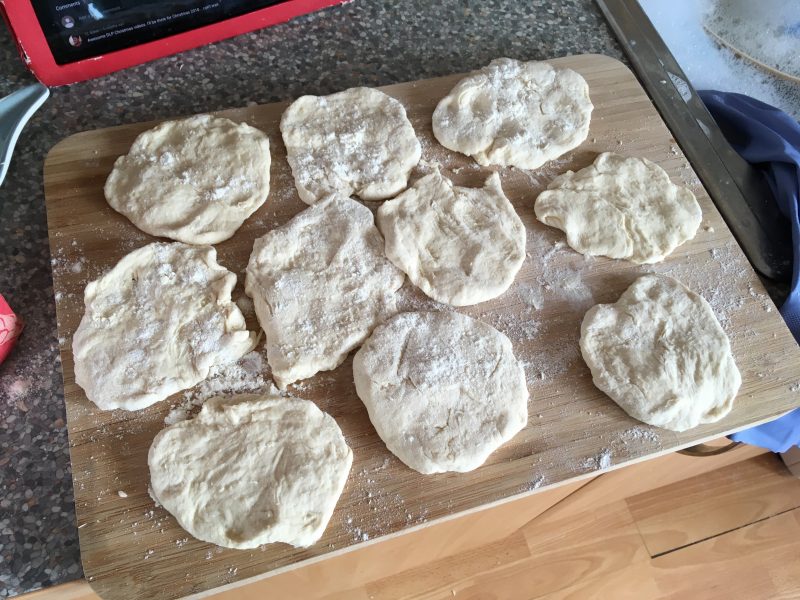 I also tried out frying my paprika rice with the luxury of three sardines, which I found alright when freshly cooked – it was so lovely to have a bit of saltiness, and realised how addicted I normally am to salty food!

The rice bread came out fine, albeit a bit moist and dense in the middle. As I had no butter in my ration pack, I made do with frying chunks of the bread as croutons, which gave my fired rice some much needed crunch. The falafels I attempted just about survived the frying, but with no herbs or other vegetables available they were rather uninspiring although filling.

By Day 4 and 5, I was actually rather surprised that I didn’t feel too bad. I didn’t feel faint or overly hungry – my colleagues’ well-meaning concern made me feel as though I should be lying down at all times, but was able to 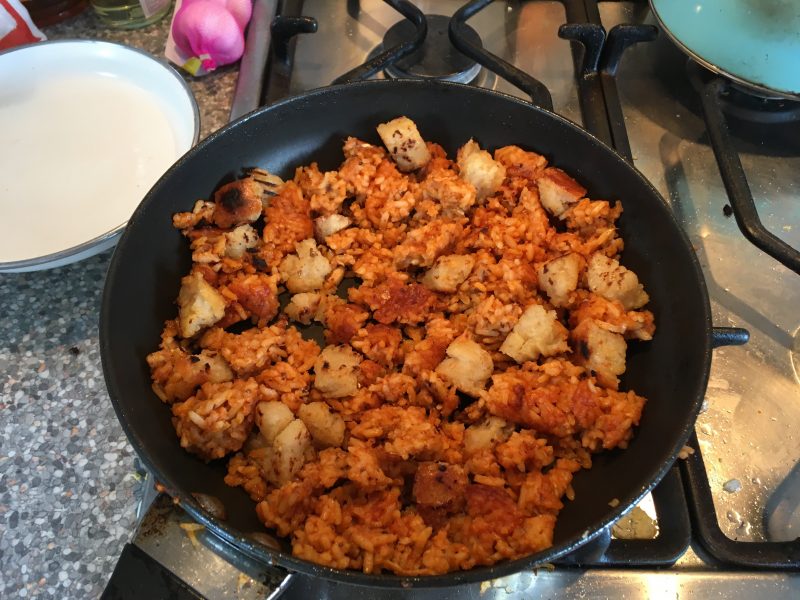 keep working and cheerful. I had gotten to a point, though, where I had grown apathetic when it came to the food I ate. I would push rice around my plate, trying to convince myself to eat another tasteless meal to fuel me to the end of the day. I was fine with other people eating around me – but I couldn’t bring myself to look forward to eating, instead relying on drinking more water and eating as much as I could stomach.

Currently, there are more refugees and displaced people around the world than at any time since World War II and number 68.5 million according to the UNHCR. Every single day an additional 44,400 people are forced to flee their homes because of conflict, persecution and natural disasters. These statistics are almost beyond comprehension, and the geographic nature of the refugee crisis (with 5.6 million refugees coming from Syria, 2.6 million from Afghanistan, and 2.4 million from Sudan) very easily makes it a problem so far away.

Every day at work, my colleagues were amazed that I was eating like a refugee for the whole week. The thing that seemed to grow in me throughout the week, however, was the utter incredulity that for some people this diet is not a temporary thing. This is not a nutritious diet, and quite a few people I knew voiced their concern over my wellbeing, especially as I worked full time for five of these challenge days – and yet, refugees are expected to work in whatever work they can find and survive on this diet, far away from the privileges that I am able to enjoy. These rations are sent to children and the elderly as well, and yet the lack of nutrition, flavour and choice is not questioned in the mainstream media. Children currently make up around 20% of Syrian refugee camps, and many have known only this way of eating for most of their young lives.

I know that the Syrian crisis is seen as ‘old news’ – but how is it that society has become so complacent and desensitised of a human story where the most luxurious food item of someone’s week is a small tin of sardines? Yes, this is enough to survive on – but it is nowhere near enough to thrive on. A donation of £39 will feed a refugee for 3 months, which is basically a cost of £3.25 per week for a refugee to eat. Meanwhile, Colchester Zoo spends £33.84 per animal per week for food and veterinary bills. How can a person work, live and thrive on an amount less than 10% spent on an animal in captivity?

I like to think of myself as a lover of food, who can cook relatively well – and yet not only did I have to be endlessly creative with what I had, but I was constantly disappointed by the quality of food I could produce. At least I was only disappointing myself – I couldn’t imagine going through all the recipes and disappointing a family too, especially with my stodgy rice milk bread (although they did become rather fantastic croutons).

It’s been a week of discovery when it comes to my relationship with food. I found that my love of food really came from the flavour and quality of ingredients used – I found I would rather eat only a small amount of the bland food I had managed to prepare. I would rather keep drinking water and sharing challenge updates for my peppermint teabags than eat something without salt, seasoning or vegetables. When I managed to raise enough money to add salt to my food, it was as though I was having a religious experience and food suddenly became something I could finish instead of push around my plate.

Maybe it was the shining promise of fish and chips on Friday (a dish, incidentally, brought over to the UK by Russian Jewish refugees) that kept me going. Maybe it was the fact that my normal diet was able to sustain me through a week off. But definitely I felt incredibly lucky that I was able to go back to a healthy, nutritious diet; that my life was not disrupted beyond the rations; and that my life would continue as normal when Friday morning arrived.

On completion of the challenge, we had managed to raise an amazing £413.40 to help refugees in need – that could pay for over 30 school kits for refugee children, or medical visits for over 75 refugees, or food for almost 3 refugees for an entire year. Whilst I have become more socially conscious of the effect that good food has for people in need and of the refugee crisis in general, I’m really proud of the awareness we were able to raise while knowing the money raised is going to an amazing cause.

For further information on the Ration Challenge, visit www.rationchallenge.org.uk.

Sleaford Quality Foods have been awarded BRC AA grade status for the 6th successive year. Our BRC AA status covers our traded goods activity as well as our blending & packing of dried food ingredients and dried food mixes for gluten-free and gluten containing products. BRC is the leading and most recognised safety and quality certification programme…
View Article

Our latest Market Report provides updates on a wide variety products including: Herbs, Spices & Seasonings Seeds Dehydrated Vegetables Pulses Ingredients To download the full report just click the link below: Market Report – January 2021 Contact us today for further information. Call Us: +44 (0) 1529 305000. Email Us: enquiries@sleafordqf.com. Talk to Us via…
View Article

New addition to our fleet

SQF’s latest addition to the fleet! The latest addition to our fleet of vehicles is now on the road helping deliver our comprehensive range of products to customers across the UK. The state-of-the-art cab uses the latest technology to minimise impact on the environment. Logistics Manager Niall Prenderville commented: “The company always aim to utilise…
View Article